New to this so please be patient if this has been covered elsewhere. I seem to have different data locations in my Apple Music/iTunes and Audirvana Origin, leading I suspect, to missing albums and duplicates in AO. I use sync, both kinds, but would prefer to dedicate AO to music and keep Music just for music videos and for music which I have purchased or stream… My Mac Mini is connected to a dedicated external drive which contains all my music files as loaded via iTunes over many years. However, when I compare this with the Apple Music files I see differences which I suspect are causing some problems. How should I set up AO so that I don’t have to sync with Apple Music? I can still use my Superdrive to rip CDs but can import them independently into AO. 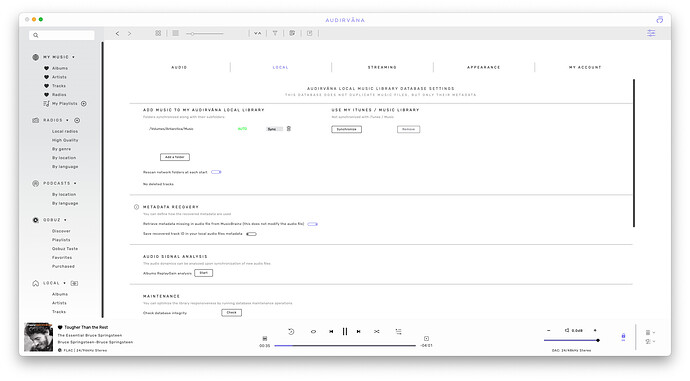 I’m using Audirvana Studio, but it should be the same thing for Origin.

I’ve never selected Audirvana to sync with my iTunes / Music Library. And I have Audirvana only automatically syncing my local music folder.

It picks up all current and new music files that I’m putting in the local folder /Volumes/Antarctica/Music
Works great here.

Thanks, I’ll experiment with the local folder alone and turn off sync. Cheers.

APPLE MUSIC USERS: Apple Music took my perfectly organized music and reorganized the files into a new “Music” folder nested within the Master “Music” folder during the uploading process to mix & match their cloud-based library. First off, it caused the duplicate album problem many have complained about with AO, which is caused by the file restructuring within the iTunes Music folder (You will see a folder structure: iTunes>Media>Music>Music>). The solution is to never use Apple Music to tag your files before syncing with AO. If your database is in shambles, you should use an older version of iTunes on an older Mac that will support it.

-Import your database without copying the files.
-TAG EVERYTHING: Disc 1 of 1; Track 1 of 10; All sort fields; album art; etc.

An older version of iTunes will not only automatically restructure the files correctly, but will appear perfectly in AO without any glitches. I was on the phone with Apple “Technical” Support several times and they couldn’t figure out what was going on. Eventually they closed my case and I took on the reconstruction of my database on my own with success.