Artist listing in the album view

I use the album view of Audirvaña Origin to browse my library and have albums grouped by the artist. The program has problems showing all my Kevin Coyne albums together in a group: An album by Kevin Coyne & Dagmar Krause interferes the gathering. Chronologically it would fit into the spot it sits, but nevertheless it shouldn’t be there.

All artist information are correctly tagged, both in the Artist and the Album Artist metadata tag sections. The artist view has both artists seperated correctly.

What could I have missed? 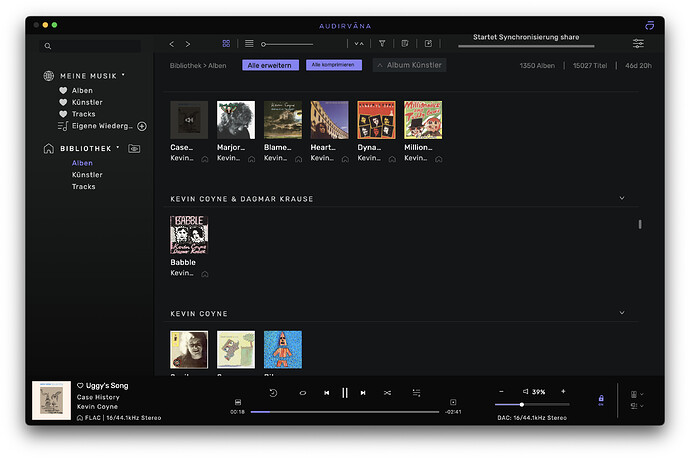 click that album, don’t select songs, just put info panel and see if the sorting tab is different from the Artist, change it, and save.

Thanks, but all tags are correct. There is no sorting tag active. I checked the tags a zillion times now

You check in Audirvana? 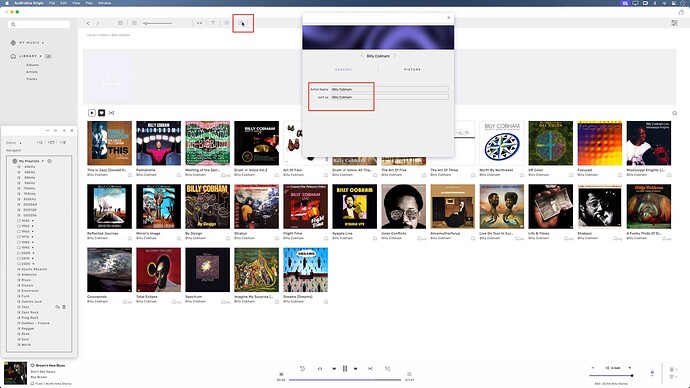 It is easy to see that, that one album as the two names in Audirvana as an artist…

If not the sorting, select all songs and put back info panel at first tab and see if 2 artists there…

Or go in artist view, select that artist and put info panel, like in picture

Thanks for trying to help!

If you want the artist coyne / krauss
To be listed as coyne only and be listed with that artist alone, with the other 3 albums of coyne… you have to remove Krauss name somewhere

I know how to tag and it would be easy to tell Audirvaña where to put the albums using other tags, but there’s either something wrong with my tag, or Audirvaña is sloppy here. That’s what I am trying to figure out. The albums should be grouped by artists and there are tow artists, “Kevin Coyne” and “Kevin Coyne & Dagmar Krause”. As I wrote, both have their own group in the artists section, but not here, within the album section.

I maybe too tired or not understanding you enough looking at this on my cell in a car.

But… if Audirvana is sloppy there, then what you do? because it is here your library final view, so change tags to see what you want to see here…

Tags are not right, you made them right

At one point I thought Audirvaña’s behavior was a bit too strange and the “&” character could propably cause some problems. So I did some testing. For this I copied all the Kevin Coyne and Kevin Coyne & Dagmar Krause music to my laptop’s hard drive and let Audirvaña built a new library with only those files. Unfortunatelly the wrong grouping still existed.

I then used my tag editor and changed the “Album Artist” tag from “Kevin Coyne & Dagmar Krause” into “Kevin Coyne and Dagmar Krause” to see what happens in Audirvaña. This is the tag that Audirvaña lists as “Artist” when you activate an entire album and open the Audirvaña tag editor. But in Audirvaña the changes I made with my editor weren’t visible, and it did not update the tag within an hour. Even when I completely changed the name to something totally different, it wouldn’t show up in Audrivaña. This means that Audirvaña relies only on the data of the first import of the music files.

(What Audirvaña does synchronise instantly is the “Artist” tag. This one is shown when you open an album and you see the list with title number, title, length, artist, etc. That artist entry was changed as soon as I changed that tag in my tag editor.)

Fun fact: When I changed the name back to “Kevin Coyne & Dagmar Krause” in the test library using the Audirvaña editor, the grouping stayed how it should be.

So, whatever changes I make within the “Album Artist” tag with my editor, wouldn’t be read by Audirvaña until I do these changes with Audirvaña’s own editor, which on the other hand won’t even share its changes with the actual file. That’s odd.

In the end I deleted my original library on the NAS to let Audirvaña do a fresh import of all my files, as I didn’t know what other information were not updated. This took a while and I wasn’t expecting a change, but what do you know! Although the Kevin Coyne files weren’t changed at all, the grouping finally was correct and voilá “Kevin Coyne & Dagmar Krause” were put right after “Kevin Coyne”.

I wonder if excluding the “Album Artist” tag from synchronising was just overseen or done on purpose. Audirvaña is fast in synchronising other tags. In this particular case, it might have just been a hick-up that caused the wrong-grouping, but I generally do prefer editing my music files with my tag editor and would think, that the player software updates all the information I make.

Anyway, that’s how I spent my Sunday afternoon

And thanks, @RunHomeSlow for trying to help!