How to catalog a CD Box Set?

Here are the advantages and disadvantages I found for each method:

What solution do you use and do you have other cataloguing methods?

The method 1 is the standard way, just mark each track as [disc]/[track]. There is a specific tag for that.

The album art can be set on album level as long as you use a “album” tag like [collection] CD [n], or something like that. It just needs to be distinct for each CD in the collection.

Thank you bitracer for your answer. Where do you find these tag usages?

I tag outside Audirvana, but you can also do this in Audirvana. See screenshot:

After a few tries I succeed to get the name of the album in addition to the name of the Box Set with the Tag Grouping edited with Mp3tag. The result is the following (sorry my GUI is in French):

However I still can’t see the covers of the different records but just the Box Set’s cover.

Thanks for your help bitracer. Sorry but in the album view I don’t see every record but only the Box Set. So I can’t modify the record covers of this Box Set. 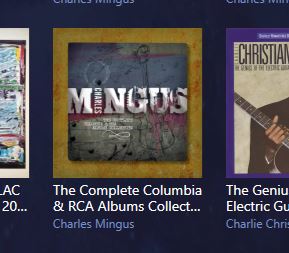 Make sure that every disc in the set has a different album name, something like [album name] [disc n], Then you’ll see each disc as a separate album and will be able to change the cover art image.

If I give each record a different title I can indeed put a cover on each one. However, I lose the association of the discs in the Box Set. I tried in this case to give all the discs the same Box Set name with the Tag Grouping but the discs still appear dissociated. In the album view it is however possible to activate a filter on the Grouping field and thus see all the albums in a Box Set but it is not very user-friendly anyway and it does not allow to have the Box Set cover.