I am currently testing Audirvana Origin and I was hoping to see a significant improvement in performance when handling large libraries. My library contains about 336K tracks and if I leave checked the option to rescan folders for changes at each start, the syncing for all folders takes about 4 hours which is a long time to wait for all new music to become visible. I have split my library into different folders by letter and added each folder to Audirvana separately, but the syncing is happening sequentially, one folder at the time.
In comparison, the same resync used to take about 5 minutes in Roon on the same computer and was happening in parallel which sped it up considerably.
Is there any way to configure parallel resync for all folders in Audirvana also or somehow speed up the startup rescan and bring it down to a few minutes… having to wait for hour for all new music to become visible in Audirvana is a real blocking point for me and disabling the startup rescan is not an option either because changes to the library will not get detected automatically anymore. 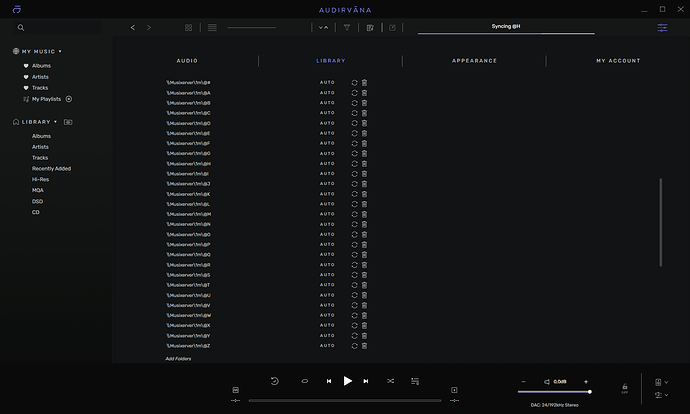 I had the same issue yesterday, and I posted about it in another thread.
Origin proceeded by re-syncing each folder, and the resynchronization of some 100K tracks was not over after more than 13 hours! During this time, the player was barely responsive and displayed the beach at each click.
I ended by killing the process.

I noticed that synchronisation is much slower than with old 3.5. I run them simultaneously and 3.5 finishes adding new folders in few seconds while Origin takes few minutes…
Also some features takes more steps to reach: like shortcut to location of files, some sound settings…
I listen to local files only, but so far I am not totaly convinced. With level of preformance of 3.5 + additional features it provides (streaming ability) Origin has to provide much more fluidity in its performance. Big plus of Audirvana (all versions) is how it recognises all formats (including Flac, ISO DSD… ), and I hope they will resolve their issues with synchronisation, to be at least as it was on old 3.5. , even enhance it and then it would make a reason to buy new software.
Soundwise it is just a fraction in front of 3.5, but still behind freeware Foobar on Windows!! Sorry, but that is the fact.
If I would have a full access to all Foobar features on my Mac you would not see me here.
Damien, do you remember times when people bought vinyl and then while listening also looked on covers for prited lyrics? Now living in digital era we are without it with the price tag you ask?

Even when I restart Audirvana with no modications in my library, it still takes over 1 hour to resync… nothing and during that time the performance of the interface is still impacted. So far I am not overly impressed with the way it handles library changes…

I am humbled by you folk. I have 10K tracks and thought I had a lot. Guess not. 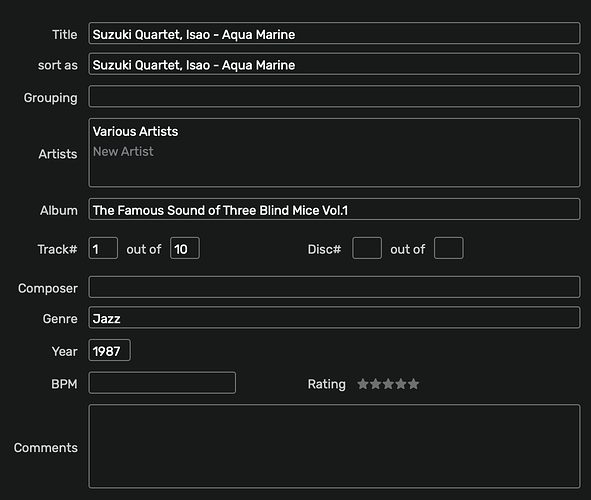 slika1124×950 49.4 KB
I am missing one filed in editing screen, as seen here: Album artist. If an album is with Various Artists then each track has different performer… You know what I mean… I do not see it in this screen or I do not get it right?
Once I change meta data of files with other software and save it, it shows instantly in Origin. Good work. And people talking about hours for syncing - com’on - there must something wrong with your library. I had no issues with my old, neither with new one. On instalation it made new version of old library and so far, beside beeing slower when adding new files than old 3.5 everything is ok… Visualy much more eye pleasing, volume management is much, much improved in Origin… Digital filters work better… Somehow I feel that there is much more under the hood than we hear… Longer I use it more satisfied I become… I hope that some childish bugs will be soon resolved and that it will give us enough reasons to buy.
Cloclo April 18, 2022, 3:43pm #7

I do not see it in this screen or I do not get it right?

I noticed that when you select multiple tracks, the Album Artist field did not appear in Studio as well.
It appears only if you select a single track. If you want to change the Album Artist of an album, you have to operate the change track by track.

@Antoine ,
The player worked fine during 24 hours.
Since then, when I launch it, it is endlessly synching.
Today, it is synching all along the afternoon.

I don’t see what I can do about it, but to trash its database.

Thx Cloclo. But this is only one line selected… In previous version you can select an album, edit it, then select each track and edit it. Here I just get this screen for each track.
Did you find a way to edit album meta?
All but ISO files was editable in ver. 3.5 (for Mac as I do not use Windows for years…), but I have overcome this with fine piece of software called SACD ISO Tag Editor. The trick I had to use for Audiravana to recognize new metadata in ISO file was to remove it from folder with music files, sync, then move it back. And in few seconds it was there showing new metadata.

You mean that I can change Album artist in Album info, and track artist in track view? Weird because in both infos it is only written: Artists !?!?
Haven’t tried it since I use other software at the moment to edit data… But since they promote this function in Origin it should then be done right and more user-friendly.

I don’t see what I can do about it, but to trash its database.

I trashed the database of Origin 5 hours ago. It was actually the database that was created by Studio when I tried it two months ago.
When I launched Origin, it started immediately to import the old Audirvana 3.5 library without asking me if I want it to import this library or not.
5 hours later, the import process ended by a crash.

I also reused the database created by Studio in Origin but the import worked fine in my case and completed in a few minutes. I am actually glad I didn’t have to recreate the database from scratch because scanning my full library took almost 2 days the last time. With the import I got away with a 4 hours resync…

I launched Origin this morning.
It displayed a small windows saying that it will take 3h40 to adjust the library.

I had than a good idea.
I quit Origin.
I used TimeMachine to restore the old database that was created by Studio, and to replace with it the database of Origin.
I launched Origin, and now it works like it should.

During two days Origin did not work… It’s a pity that I did not have this idea before.

For a library of 139,309 audio files, of FLAC or DSF, the update times are about the same whether there’s one album to add or many more. Today added 12 albums and the rescan took about 20 minutes.

Minimserver on the other hand took less than counting to 10 seconds and that application records metadata available for streamers. Jriver takes about 5mins if the media server cycles the scan, or less than half that for a manual import.

I thought that network bandwidth and speed could be a problem, so many moons ago tuned the Windows network performance from a modest 10MB/s to a consistent (minimum) 58 MB/s (that’s MegaBytes) on a GB LAN. This is roughly the same as local hard disk copying, so network lags are not the issue. As reported Roon scans are really fast, if Roon is happy with the network you provide and is on the local hard drive.

There are a few quirks with this software, a lot of them could be ironed out in the upcoming months, but the scanning of new albums needs a lot of improvement and has a high priority.