So how is Origin?

I just noticed that there is now Origin and Studio available. Why am I just noticing this? Probably because I had to abandon Audirvana 3.5 in 2019 because I got tired of the constant maintenance required to rebuild my library or dumping the .sqlite file weekly due to duplicates getting scattered through over 2000 albums due to an apparently unfixable bug. I decided to listen again to Audirvana tonight for the first time in ages only to start hearing songs multiple times yet again.

Is anyone having bugs in Origin that appear to be forever present like those in 3.5? I am very apprehensive to go down this road again since I had issues from day one the last time. I currently have that whole “fool me once” concern since I have already purchased one broken Audirvana version that stayed that way. I have to admit that I don’t enjoy the sound quality as much through my DAC using Emby but I will (and did) sacrifice sound quality for a less buggy solution. Is Origin any better from a coding standpoint than 3.5 was or is it an update with the same old bugs?

I use Origin without issues, but I also didn’t have any problems with 3.5.

I would suggest to try it out in your setup.

ONly ever minor issues with 3.5… mostly user error. Origin has no issues. A couple of changes that would improve it for me, but it otherwise good.

If you try it, you can delete the .sqlite before starting Origin, so it will not be updating from 3.5 but built a new database…

Using Studio since release and 3.5 for about a year before that. So I have over 2 years of experience with Audirvana.

I’ve never had duplicates in both versions. Are you sure you don’t have duplicate files on your storage?

I would recommend starting with a fresh new database when giving Origin a try. So don’t import anything from 3.5, and have Origin search for the music itself. 3.5 and Origin/Studio can coexist without problems. Because they have separate databases. I’ve setup Studio this way.

Thanks for the responses everyone.

Let me attempt to be a little more clear on my setup and the actual problem that I was having since it appears that most of you never had this problem. I will also explain what was suggested and attempted on my part to avoid it, without success.

@sandsOfArrakis- I was using only 3.5 and have never attempted to install Studio or Origin. Didn’t even know they existed so I am not seeing duplicates in both apps. EDIT: I think I misunderstood what you were trying to tell me. I get it now. Thanks.

My listening setup as follows- 2016 MacBook Pro w/2.7ghz i7/16g through a Hegel HD12 DAC. All of my music files reside on a Qnap TS-873 in my LAN which in turn backs up all files to a remote TS-473. I DO NOT use iTunes or Apple Music on my MBP, iTunes complications were supposedly the source of this problem. This was not the problem in my case because I don’t use iTunes (or Apple Music) and have only an empty “music” folder on my MBP. My music sync folder is pointed directly to the Qnap DAP folder and I have no secondary source in Audirvana. I don’t let Audirvana rescan folders at start up. Syncing only takes place when I hit the sync button.

It was then suggested that the solution to this problem was to avoid having any activity occurring in your synced music folder while using Audirvana. I never had any activity in the music folder while using the app (other than choosing the music) nor does my NAS perform backups or maintenance during use since I schedule those activities for 3AM. Supposedly using the app while synching was a possible issue. Other than allowing the sync operation to complete, I never used Audirvana in any way during a sync. Another possible solution was to delete the playlist before exiting the program… nope, that didn’t work either. I finally purged the the program and all files in its entirety out of MacOS. I rebuilt the library and started from scratch agin while making a copy of the .sqlite file on a thumb drive. While being very careful and following every suggestion that had been offered for people having this problem, no dice. Still had to swap the .sqlite file every couple of weeks when I started noticing duplicates all over again. Oddly enough, the program always worked flawlessly (or at least without frustration) for me in every other way but the non-stop duplicates finally wore me down causing me to abandon it.

I really appreciate the help and responses everyone, I am all ears if you are using a Mac and have a solution or never had this issue. If you are using Windows, thanks for the response but we are now comparing apples to oranges since they are different OS and different apps and think it is an app issue due to the OS.
All I really want to know is if any Mac users have issues with Origin.

I’m using 2 setups. Both Audirvana Studio as I also stream music through Qobuz and listen to Internet radio. Studio and Origin are the same piece of software. The only difference being that Origin can only play local files. While Studio also gives access to Qobuz, Tidal, Podcasts and Internet radio.

So nothing very fancy, but it just works here. 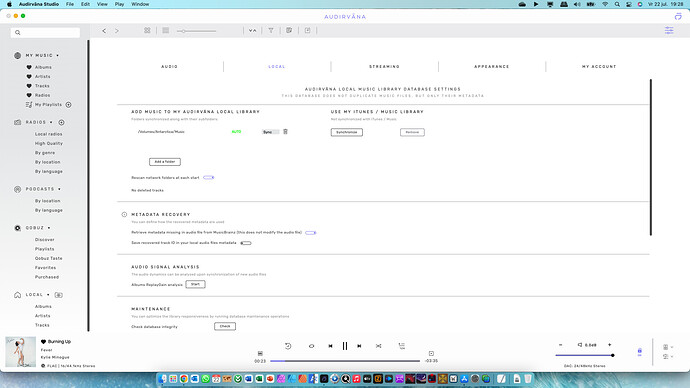 This is how my MacBook Pro syncs the local music. My Air is setup in the same way.
I’ve never run into any duplicate files on either system.

Thank you very much for again responding.

I suppose that I have nothing to lose by giving the trial a shot. I never had a problem with the sound quality of 3.5 and hope that maybe I can have better luck with Origin. I will give it a try as has been suggested by you and some other responders. Since I am still having duplicate issues, I suppose that I might remove 3.5 in its entirety and start fresh with the Origin trial.

I’m wondering however what is/was causing the issue in 3.5 since you are running Mac but never experienced the dupe problems. Maybe it’s like the iPhone battery issues… some have chronic problems while others have none at all.

He‘s thinking about switching to Origin.

I suppose that I have nothing to lose by giving the trial a shot. I never had a problem with the sound quality of 3.5 and hope that maybe I can have better luck with Origin. I will give it a try as has been suggested by you and some other responders. Since I am still having duplicate issues, I suppose that I might remove 3.5 in its entirety and start fresh with the Origin trial.

I’m wondering however what is/was causing the issue in 3.5 since you are running Mac but never experienced the dupe problems. Maybe it’s like the iPhone battery issues… some have chronic problems while others have none at all.

You don’t have to delete 3.5. As 3.5 and Studio/Origin are completely separate from each other. They each have their own database. Just point Origin to your music folder and have it scan for files.

If you run into a duplicate. Could you check if you don’t have that file as a real duplicate on your server?

Downloaded and installed Origin. The app decided to auto migrate my files from 3.5 so now Origin is also full of duplicates, which aren’t present in the music files on my server.

Thanks for your help but I’m officially done. I appreciate everyone taking the time to respond but I’m out. Thanks and have a great day.

Sorry if I’ve misunderstood (a couple too many Corona’s), but was your 3.5 database still on your mac prior to installing Origin, or had it also been removed along with the app?

@Ironz- yes, 3.5 was still on my system since I was led to believe that it wasn’t a problem by a previous poster. It really doesn’t matter now though since both versions have now left my system.

And to Jim_F, who insists that I am asking for help on 3.5, I gave up on finding a solution in 2019 and you would know this if you bothered to read the second sentence in the original post. I also made it clear in the very last sentence of reply#6 that I am trying to determine if such issues exist in Origin, thus the title “So how is Origin?”. By explaining what was going on in 3.5, people would have an idea of the issues that I want to avoid if I am paying again to update to Origin.

To be clear and so there is no misunderstanding, I am very appreciative to everyone who has responded (except Jim_F, both times) but I am no longer needing opinions of Origin since I have decided to cut my losses. Everyone take care and stay safe out there. Thanks again.

You’re giving up too fast.

To be totally honest, he really isn’t in my opinion.
Time is precious, and who really wants to waste it on a product which;
a. doesn’t function as it should, and
b. for the past two weeks has had absolutely zero ‘official’ support (your very best efforts excepted of course @bitracer, as helpful as usual)

After 11 months, I still feel like a fair few of us are identifying problems with the software that the developers are either unwilling, or perhaps unable, to rectify.

for the past two weeks has had absolutely zero ‘official’ support

In France “Les vaccances” are sacred. So, you must be patient.

You’re giving up too fast.

What would be an acceptable amount of time/money investment be?
Everyone has a different acceptable pain in the @ss tolerance level.
I should have never gone beyond the trial period of Studio, I invested a years subscription on hopes and promised fixes, live and learn. Spend your time and money wisely. Plenty of good solutions for getting great music playback these days.

Fair enough @Cloclo. I wasn’t aware that the whole of France took the exact same two weeks off.
It would, after all, be ridiculous if the only two ‘official’ spokespeople of Audirvana (on this forum, at least) took the same two (?) weeks off now, wouldn’t it

Vacation or abdication? Perhaps something lost in translation

I kind of miss the weekend update releases and the havoc that ensued, NOT

@bitracer and @RunHomeSlow have it under control quite well, I vote they take a couple more months off get the suntan evened out.