I’ve been trying to use the “Add to Queue” function. I’ll be on some of my Tidal playlists and I’ll try to add a track to the Queue. However, instead of adding just the single track it adds the entire playlist. Today, I added 10 songs and found I had added 2,000 tracks to the Queue!

I’ve been encountering this for a while, but thought it would just get cleared up in an update. I wanted to write in though to check if you are aware of this or if I’m doing something wrong.

I’m on 3.5.28. I know there was a similar issue with albums that got resolved. Is anyone else encountering this? is there a workaround?

Hello @edwardsean, if you are on the track view then when you click on a song it will automatically add all of the rest of your Playlist in the play queue. If you want a specific song to be played you can click on the three dots and select " Play Next" 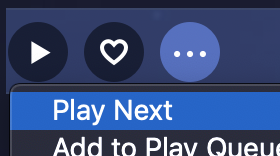