Facing the situation where two albums with identical name but different artists, I tried to delete one album:

And by the way, it should be good to have some checks performed by Audirvana when two albums have the same name. An error message, or a proposed change of the name of the new album for example would be good.

On my side, I discovered that the new album appeared with the right cover but with the tracks of another album…

A bit weird and hard to track. Fortunately, as I have a limited trust in the import facility, I always check the results. And I finally managed to change the album name, remove it from the folders, resync, and add the new album, and resync. A bit complicated for an error that should be easy to track.

BUT: no OK button, only a CANCEL one!!

Do you have a screenshot of this?

On my side, I discovered that the new album appeared with the right cover but with the tracks of another album…

Are they in the same folder name?

Bonjour Antoine,
Here is the screenshot: 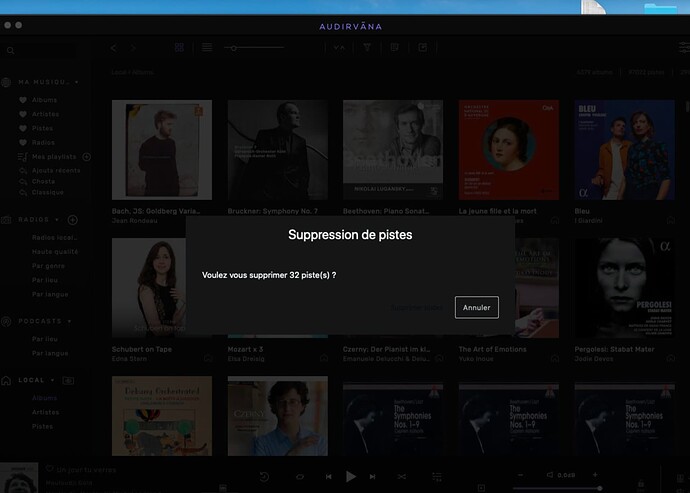 And, YES, the two albums are in the same folder.
When I imported the new one I was surprised not to see it added and counted in the total number. I then finally discovered that an older album with exactly the same name (But different artist) has been reused and the cover updated with the one from the new album.

When I imported the new one I was surprised not to see it added and counted in the total number.

Apparently, the newly added album had everything in the metadata. To confirm that I opened it with a tag editor and that is how I noticed the album title was identical to another album.

And, after having modified the title with the tag editor (By adding the artist name to the title) I was able to import it successfully with everything correct from title to tracks, and including cover.