I noticed a strange issue when an album has an identical composer on all tracks.

When looking at one of Gene Ammons’ albums (Blue Gene), the composer in tracks 1-4 is the same Mal Waldron. Strangely, Mal Waldron appears as an album artist in the header of the album.

I noticed this behavior with other albums that have only one composer over all tracks. When there are several, different composers, this phenomenon doesn’t show up.

I guess it is a fluke in the data base management software?

It would be nice if this issue could be resolved. 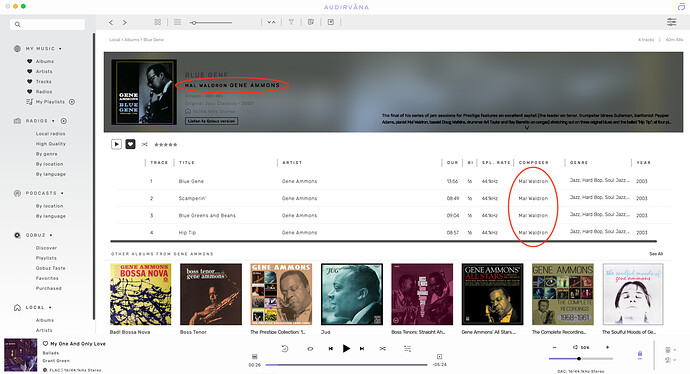 Hello @Sailor ,
In my opinion, this is caused by the MuscBrainz ID tag.
I noticed already such strange things in the database of MusicBrainz regarding composers.
Example: MusciBrainz can add Beethoven or Mozart as an Album Artist to some albums.

Hello @Sailor, in the album where you have multiple composers, does it displays “Various Composers”?

I doubt it, though I cannot rule it out completely. I took the same file (Gene Ammons/Blue Gene) and removed all tags in Mp3tag (see screenshot, doesn’t show any tags anymore). Then I re-annotated the same album in AS’ own tagging tab. And yet, the same phenomenon, with Mal Waldron being an album artist.

I cannot exclude, though that MusicBrainz Picard writes something hidden that cannot be erased anymore. But I doubt, though I have no proof for it. 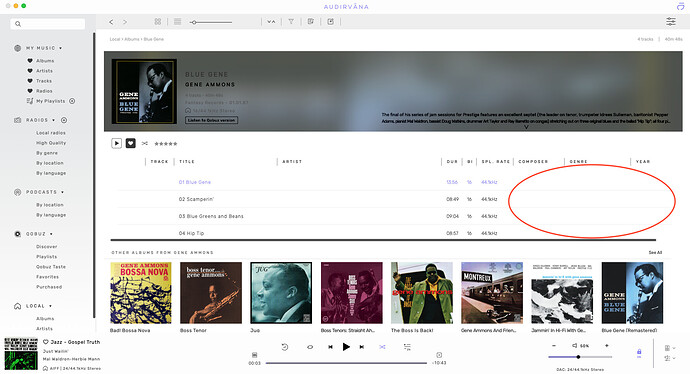 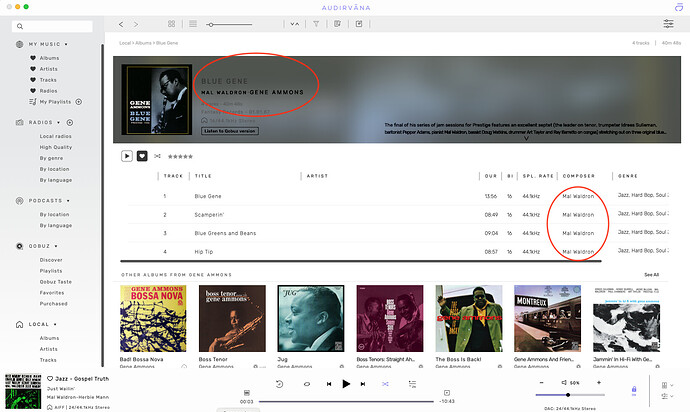 No, it does not. The composers are perfectly well displayed.

Have you take a look at the same album using 3.5? We display the composer before the artist and separate it with a - between them. We made the same thing with Studio.

No, I haven’t looked at this particular album in Audirvana 3.5, but will do tomorrow and report back.

Now that you say it, in Gene Ammon’s album, the composer is shown before the album artist, with a hyphen, so that would fit. However, it is in the artist tab and should not appear there in the first place. In other albums, having various composers, no such thing happens.

The phenomenon that you describe fits well a display generated by a MuscBrainz ID tag.
This ID tag, being written in the database of AS, after the accoustic analysis, makes the player to display the metadata of the MusicBrainz database regarding this album, rather than the metadata that is written in the tags of your tracks.

For this reason, Mal Warden reappears as an Album Artist even after you deleted all the metadata of the tags of the tracks, and rewritten new ones.

I still don’t understand why it only happens when an album has one and the same composer on all tracks. If it were a MusicBrainz phenomenon, it should happen with every album.

I believe it’s a problem with the algorithm of SQLite embedded in AS.

In the database of MusicBrainz Mal Waldron plays piano on the tracks of this album. 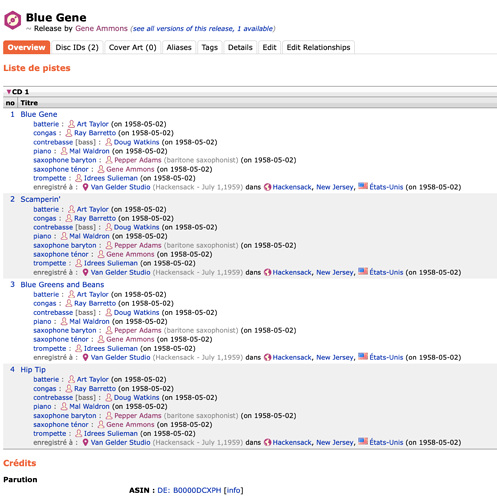 I believe it’s a problem with the algorithm of SQLite embedded in AS.

I don’t have AS to try it, but if you want you can do it.
Remove the database of AS and put it on the desktop. Keep it safe there. Launch the app and it will create a new one. Then add to AS only this album, let it analyze it, and then see if it happens again after the analysis of the tracks.

No, I haven’t looked at this particular album in Audirvana 3.5, but will do tomorrow and report back.

Have you find time to take a look at this album in 3.5?

Super idea, will try that!

That explains it!!! Great you looked the album up!

I don’t seem to have a valid license for 3.5, it doesn’t accept my current AS license. Anyhow, @Doudou might have sorted it out, Mal Waldron appears as an artist on the album and not just as composer!

Thanks for your help!

I don’t seem to have a valid license for 3.5

You have one, I can give it to you in a private message if you want to. There is no license for AS.

That explains why Mal Waldron appears like one of the Artists. However, he is not the album artist of the album. I have the CD rip of this same album, and the Album Artist is Gene Ammons.