I am getting Many Duplicate Albums in the Tidal My Music section.
Is there a Fix for this or can you Please look into this problem?
Using Audirvana Plus in Windows 10 system.

This is a TIDAL issue as Audirvana Plus displays the exact list of albums it receives from TIDAL.
Please note there are duplicate albums in TIDAL catalog.

Thanks damien , But I am sure that this is Not a Tidal issue because I have the Exact same Tidal favorite Albums in my Roon program and there are Zero Duplicate Albums in it, So there must be some sort of sorting issue with the Audirvana Plus program for Windows 10.

Or roon does not use Tidal information but crosses it with its own database.
What if you un-favorite a copy of a duplicate album in favorites?

When I un-favorite a copy of a duplicate album in favorites I loose Both copies of the Album and when I re-favorite that same album I get 2 copies of a completely different Album and Not the one that I just re-favored,The following Examples are just one of the many other Duplicate Albums that I am also having the same problems with other Artists as well.

With the Artist “Jewel” I had the following Album favorites.
Jewel - Lullaby (Duplicate Albums)
Jewel - Picking Up The Pieces
Jewel - Perfectly Clear
Jewel -Pieces Of You

Thanks for the list of albums.
Just favourited them, and got only one copy in “My Music”…
Do you have by chance roon running when you are doing the favorite actions?

I have Roon installed on the same computer but I Disconnected it from Tidal before I un-favored and re-favored Any of the Albums in Audirvana,But it did not make any difference at all. I also noticed that when I un-favored one of the Albums that I mentioned ,I noticed that at the Same time I did that some other Artists Albums were also altered ,meaning that they were Now also completely different and some of them were now duplicated Also.
I am Totally puzzled by All of this and have No Idea why this is happening, I do have Quite a large amount of Tidal favorites but I don`t think that should make any difference , As There are No problems like that at ALL using Roon.

not trying to hijack this thread but I am experiencing the exact same problem with Qobuz on 3.5.25 on iMac.

Hello, has anyone found a solution for this? I can see the last post on this thread was almost one year ago, though I’m suffering from the same issue. I am a new Audirvana client.

Hello @Eduardomec, which album do you have in duplicate on Tidal?

Hi @Damien3, this happens all over - Ill give the example of Hanz Zimmer - A symphonic Celebration (Live). The screenshot attached shows the problem happening 3 times. Identical titles.

BTW, can we also make Audirvana display only the highest quality track between CD, MQA, or local? 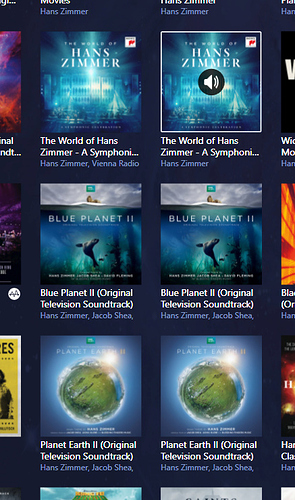 It’s an issue on Tidal side as it’s the same behavior that happens when you go on Hans Zimmer page using Tidal App. We will contact Tidal about it but make sure to do the same on your side as they maybe are not aware of it.

Tidal’s library is vast, but the UX is appalling. Can you mitigate this problem of double albums on Audirvana’s side? The messy library is the sole reason I’m giving up on Tidal as soon as you support Amazon HD… Amazon’s library can’t be worse than Tidal’s.

Tidal’s library is vast, but the UX is appalling. Can you mitigate this problem of double albums on Audirvana’s side?

That’s a good question, we will need to take a look at it to be sure we can do this and that’s not illegal stuff we are doing with metadata.

This Method Worked for Me.
In the Audirvana Settings Under SORT CRITERIA go to the “Streaming User Playlists” Option and
Disable The “Sort Streaming Owned Playlists” OPTION.
You will still have to remove ALL your current Duplicate Albums but you should NOT get ANY more Afterwards.

Hello @joseph49, you are talking about the streaming playlist. you created but in this case its more for Tidal in general, you can find duplicates of the same Album for an artist which is strange.

@Damien3, one thing I’ve observed is that TIDAL is very disorganized in their album metadata (a far cry from Spotify on this one). Sometimes you have albums with typoes or a version that is MQA and another which isn’t. This will result in the album showing up multiple times.

It would substantially alleviate the problem if Audirvana detects during album or song searches if the same album by the same artist or the same song and duration shows up in various qualities and filter out those of lower quality. Have an option to filter (or not) searches to output only the highest-quality version of a search result. So users that prefer non-MQA over MQA maintain their preference.