The latest AS version 1.11 has introduced the option to use Qobuz’s replay gain values to level loudness differences between tracks. However, with some albums/tracks there are significant differences between the gain computed by Audirvana’s built-in replay gain analysis tool and the values provided by Qobuz. Such tracks, downloaded from Qobuz and loudness-analyzed by Audirvana, result in replay gain values that can differ from Qobuz values by up to 10 dB for otherwise seemingly identical streams – that’s huge! The good news is that for music listeners preferring the most popular genres (with limited dynamic range) this is not relevant, so you can stop reading here.

The rest of this post is a bit of analysis and small-sample statistics… for those of you who are nerdy enough to still be interested.

Replay gain is calculated by Audirvana in compliance with industry standards (EBU R128 / ITU-R BS.1770). Apparently Audirvana uses a reference loudness of -18 LUFS (I cross-checked with other EBU compatible analyzer software and can confirm this). Qobuz’s gain values tend to differ from this standard if music has a high dynamic range, typically with a DR value of 12 or more. Any music with DR < 10 will result in gain values practically identical to standard.

Out of curiosity I checked 10 albums with more than 100 tracks in total. It cannot be excluded that some of the analyzed local albums have been changed in Qobuz’s repository since I downloaded them, e.g. were replaced by a re-mastered version (or downloaded files could be different from their streamed version). However, I think this is rather unlikely (for reasons I will not elaborate on here).

As examples here are two pop albums, significantly compressed in line with current genre standards and in consequence with small DR indices. Audirvana and Qobuz state the same gains for these tracks.

Moving to the other end of the spectrum, classical albums often are very dynamic and typically are (mostly) uncompressed. Two exemplary albums reveal DR indices up to 18. The differences between Audirvana and Qobuz are clearly significant. 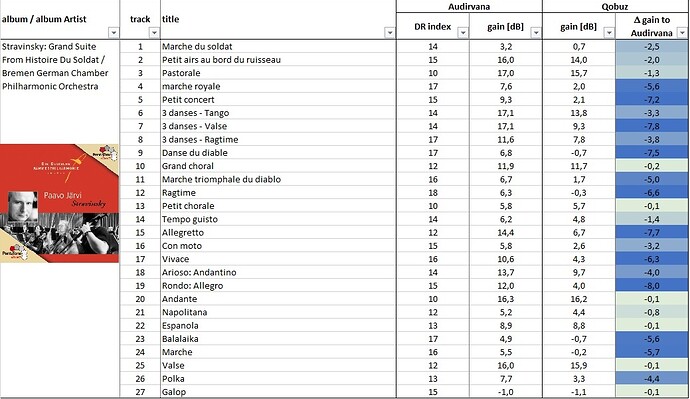 The chart below is a summary of this little analysis. Each dot represents one track (you see less dots than there are tracks because they pile up on top of each other in the region from DR 3 to 11). It is visually apparent that the bigger the DR index becomes, the more Qobuz’s loudness calculations deviate from the EBU/ITU standard. This correlation is also expressed statistically in terms of R^2, i.e. the linear regression correlation coefficient. 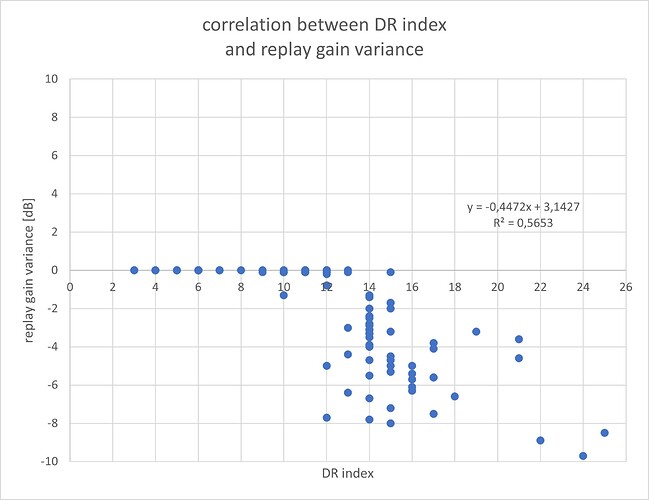 (For completeness lets add that the correlation is much weaker with the other dynamic range measure, the EBU R128 loudness range.)

The big question of course is how Qobuz internally calculates replay gain/level matching. Does anybody have a clue? @Antoine Can you share some internal knowhow?

The latest AS version 1.11 has introduced the option to use Qobuz’s replay gain values to level loudness differences between tracks.

Let me start by saying this is very interesting, the whole write up.

I have always stayed clear of loudness leveling in the native Qobuz and Tidal apps and wasn’t aware it could be done in Studio. I will have to look into this and try it out, perhaps after the wrong leveling figures are sorted.

Yes, I am not using automatic level adjustments either. However I am somewhat obsessed with keeping consistent loudness levels for critical listening, so I have measured LUFS levels for all of my albums and manually adjust volume accordingly.

In Audirvana Studio you will find the replay gain analysis under settings > local > audio signal analysis. Be aware though that AS will add the generated data to the track’s metadata! You will find the following new data fields:

So if that is something you want to avoid don’t let AS run the analysis.

It cannot be excluded that some of the analyzed local albums have been changed in Qobuz’s repository since I downloaded them, e.g. were replaced by a re-mastered version (or downloaded files could be different from their streamed version). However, I think this is rather unlikely (for reasons I will not elaborate on here).

It is clearly possible that the streaming and the version you can buy on Qobuz shop are different since some albums in Qobuz app can’t be streamed at all. I’m not the one that can really giving you what is done by them since in the end they can clearly give you more insights about it.

The big question of course is how Qobuz internally calculates replay gain/level matching.

Really good question that you should ask them about. What I can do on our end is that we take the information of the RG of each tracks that have this information and use it if Reply Gain is enabled in Audirvāna. I can’t give you more information about it since you summarized really well how RG information is handled by us in your post

You might be right, although I seem to remember a Qobuz spokesperson (Dan Mackta? David Solomon?) making a statement on some YT channel that streamed music and their related download files are identical. Anyway, I have asked Qobuz now and will report back on their answer.

Really good question that you should ask them about

you summarized really well how RG information is handled by us

Glad I made no mistake

I just received an answer from Qobuz support: “The streamed and downloaded files are indeed identical.” So we have that now.