Metadata: help with correcting the order of tracks of an album

I am trying Audirvana for the first time and everything is quite intuitive. Or most of it.

I need to correct the order of the tracks of an album. Incredibly, the software recognized the album and the name of tracks but it has arranged them in a wrong way. I would like to re-group these tracks so that they play in the intended order, but I have not been able to do it yet. I have been able to do this operations successfully on iTunes. Roon and Audiogate. Alas, it seems to be impossible in Audirvana.

Could you please instruct me on the way to perform these changes? I have studied the files and they are named and numbered in the right order.

Thank you very much.

Go in Audirvana preferences and sort your albums like you want… 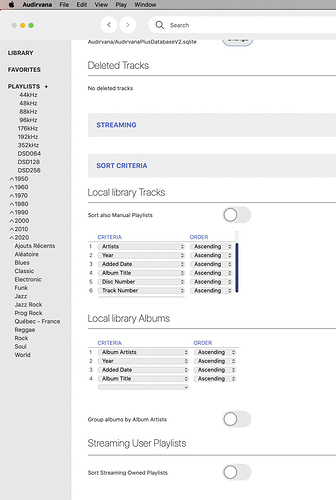 If RunHomeSlow’s solution doesn’t work for you, it might be a problem with metadatas. When you say your files are named and numbered in the right order, we must make sure it’s not only in the name of the file, but on the ID3 tags (the metadatas of the audio files) as well.
In order to change that in Audirvana, you must click on the right row in your Audirvana window, with a label icon in the middle. After you’ve selected a track, in the “General” section (to expand it, click and the down arrow next to “general”) you can define the track number of each. Then they will be sorted properly automatically on every player.
NB. It will only work if all the files are on the same ID3 album. If no album is defined either, you must select all the tracks first and type the name of the album in the General section. 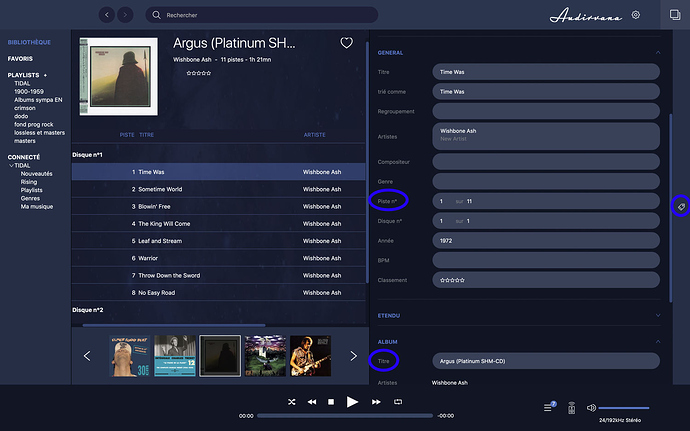 Thank you! Your information was very helpful. I succeeded in re-arranging the tracks. Now I would like to know if I can correct an album that has been split in 2. For no apparent reason, a four-track album was divided in two. Each one has got two tracks, the same name and artist and the same cover. Do you know how to fix this? Thanks again! Greetings from Buenos Aires.

I found out Music.app had a strange behaviour and was sometimes spliting some albums in two, while it wasn’t the case before (I think it arrived with the end of iTunes on Catalina). The quick workaround I found was to select the two “parts”, then edit in order to retype the album name with a slight change (like adding a space at the end), and once it’s finally one album again, retype the right album name and it works.

There are a few ID3 tags which can split an album, such as the “compilation” checkbox (an album has to either be a compilation or not, but not just a few tracks being considered as part of a compilation and not others).

Great, Yohmi, but how do you select the two parts? I have tried with different commands but failed. Thanks again!

In Music.app, when you’re in cover view, click on both covers while holding CMD. I don’t know how to do this in Audirvana

Thank you, RunHomeSlow! This just did the trick. Greetings from Buenos Aires.