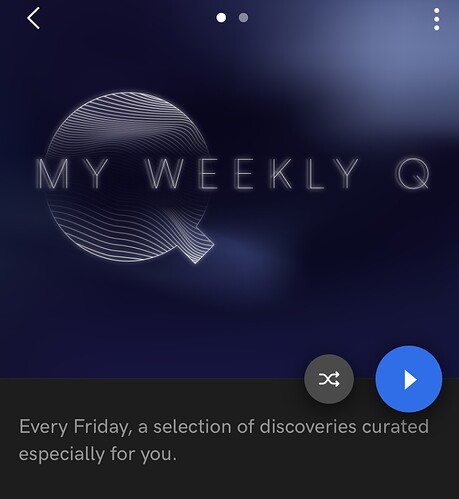 No, but I like to. I installed Qobuz windows app only for this.

@Antoine
Is the weekly Q already in the queue to add to the Qobuz overview?

We had a call with them yesterday and we asked them if we have access to this playlist, they will come back to us about it as we need to have it available through their API.

Hi Antoine, thank you very much for the update.

For the moment is not available. Hope to be soon. I will uninstall Qobuz windows app then.

Little offtopic: this playlist is great! I have used before Spotify, Deezer, Tidal. Qobuz has the best recommendations for me and is less commercial and more focused on quality (sq and content).

That’s interesting, because the Qobuz weekly playlists that I’ve had so far has been absolutely awful - and that’s the feedback I sent them after the fist week.

For me it seems to be based almost entirely on my age and geographic location, not on what I listen to.
I’m getting almost exclusively Anglo-American stuff recorded 20-40 years ago, plus a couple of tracks I’ve listened to in the past few weeks. And Adele and Billie Eilish for some unaccountable reason!!! Baffling.

This is not at all the kind of thing I actually use Qobuz for. I listen largely to non-English-language music, a lot of African music, and anything Anglo-American that I listen to is generally fairly new.

In my case, Spotify’s algorithms are infinitely better than Qobuz’s, even though I listen only very little to Spotify.

What kind of stuff is Qobuz giving you guys, and how does it relate to the music you actually listen to on Qobuz?

@Antoine - In Audirvana Studio, as well as having My Weekly Q from Qobuz it would also be superb to get the My Daily Discovery from Tidal as well pretty please…

Also, as you’re looking at these API’s and have introduced some them to live, are we now to believe that a radio button (play similar artists) is coming soon? Similar to Roon Radio. This would then make Audirvana an end game app for me as the sound is just incredible through my gear.

Thanks for all your hard work!

I’m not a Tidal user, but I can imagine you’d like to have those features added.

Is it already in the Tidal API and does Roon already have it?

If it’s not in the API, the first step is with Tidal.

I wouldn’t hold my breath until functionality like Roon Radio is in Audirvana. I don’t think Audirvana has a server running that can recommend these lists. And they do not have a partner where they can get this functionality from.

But what is not can still happen in the future.

Just as an FYI, you don’t have to install the Qobuz app to get access to the “My Weekly Q” stuffs. I use the web interface, and create a public playlist from their list (easy to do), and then my playlist shows up in Audirvana in the playlist section.

I would like to see it available directly without doing this, but this works for me right now.

Do you have any updates on this? Is it now possible to see/listen to the “Qobuz Weekly” selection through Audirvana? I certainly couldn’t figure it out.

Based on the info we got from Qobuz, they are still working on it to make it available but as soon as it’s possible to add it, we will do it in a update of Audirvāna Studio.

Got it. Thank you so much for the quick reply. Very much appreciated.

By the way, I’ve actually saved it as a playlist which allowed me to see it in the Audirvana interface.