According to this reviewer, an Electrical Engineering with a Masters in Computer Science, he’s suggesting that it’s not just 1’s and 0’s. 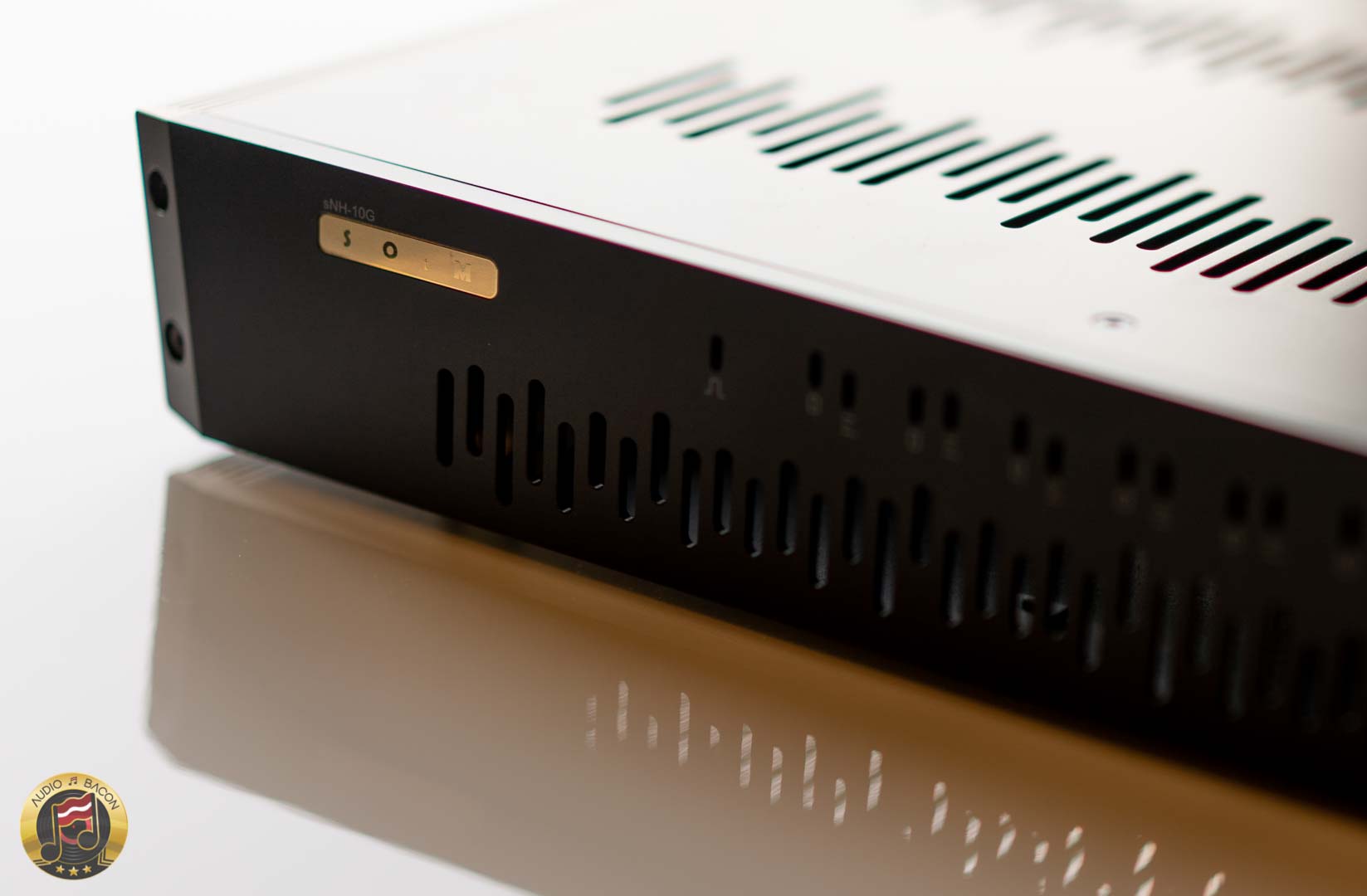 A review of the best audiophile Ethernet switch - the SOtM sNH-10G. When sound quality matters when streaming your favorite music from Tidal and Spotify.

I’m thinking about getting an SOtM switch, with an SOtM external power supply and master clock.

You are entering a mine-field here. Google on ‘audiophile network switch’ and read some more about the subject. Try to have an open mind in the flame wars you will encounter.
Basically there are 2 camps of opinions about this subject and (believe me) in both camps are highly respected people including engineers. One camp says it is complete snake-oil and the other camp says it is not. Also in these discussion the ‘highly respected’ engineers can get very upset with each other (to put it mildly).

I am aware that it is not just 1’s and 0’s because those 1’s and 0’s are transported in packets in a compressed/encrypted form. Timing and other things also play a role and not only the integrity of the data. That the solution can be found in a network switch is highly unlikely, because the network switch has no clue what data in the encrypted packets it is passing along, let alone how to recognize and optimize audio data. In good streamers/DACs with good clocks the data is buffered anyway and reclocked. The network switch is not the most logical place to do this kind of optimization.

A lot of manufacturers of these products make bold claims without scientific backup and without proper measurements. Also in most blind A/B tests people can not reliably here the difference. People claiming that they can here the difference almost never do this in blind tests and are likely suffering from a placebo effect (they paid a lot of money so it should sound better). The human mind is very good in deceiving us.

Also take a look at this

The manufacturer of the switch in the YouTube link above basically sells a standard DCom switch priced at $40,- as an ‘audiophile’ switch for around $800. Be very careful and critical and do your research. A lot of ‘audiophile grade’ switches are basically the same as an ordinary network switch but sold for ‘audiophile grade’ money.

I do not want to start (yet another) endless discussion on this forum (or on any forum) about the pro’s and cons of these devices, but my advice to you is ‘Thread carefully’ and don’t believe everything reviewers say (even if they are engineers). You never know if they are independent and objective or paid and subjective. Try to form your own opinion based on as much information you can.
I also want to add that you need a very resolving (read expensive) high end audio system if you want to here those differences (if any). My priority would be more in investing the money in better gear like a good DAC, better speakers or amplifiers.

Do with this info what you want. This will be my only post about this. In my experience this leads to endless pointless discussions where I do not want to take part in.

Thanks for the kind advice, makes sense.

I have a very decent setup.
I’ve invested in good power conditioning/grounding and it a made a noticeable difference, was thinking about conditioning the Ethernet as well.
However I’m really holding back because I have found a lot more snake oil comments regarding audiophile Ethernet gear online in general.

At some point probably everything matters. There’s unfortunately very little real research in this field and the companies creating these “audiophile” switches are just applying general concepts accepted in the audiophile world to network equipment. A little bit of shielding, some better oscillators (if at all) and then sprinkle it with higher grade capacitors.

On the cheap, you can get the 90% of the theoretical benefits by using a Fast Ethernet (10/100Mbit) switch instead of Gigabit switch just before the streamer.

There was a good discussion on hifi wigwam recently. It persuaded me to try a switch before the streamer which was beneficial, at £30, worth a go.
I also tried shielded ethernet cable but that breaks the galvanic isolation and made things worse.
Happy listening! 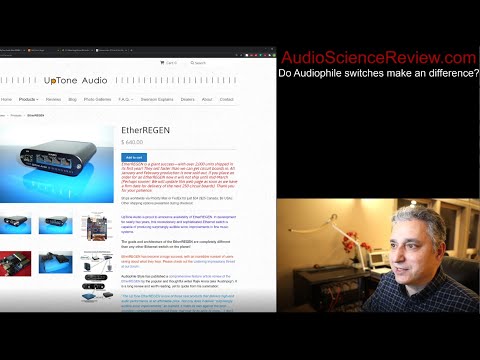 Just saw this yesterday and thought it might add to the conversation. 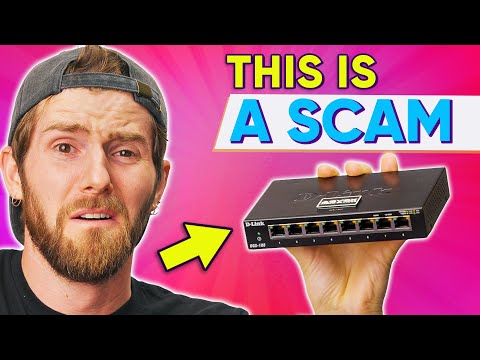 Where do they sell these things?…………

Asking for a friend

More important will be how the power and ground/earthing is managed and the implications of RF influence and EMF proximity on all components both up-stream and down-stream especially at the DAC…
One thing the disciples of Audio Science Review must take into consideration is Amir’s vagueness regarding the threshold of human hearing and the sensitivity of our hearing mechanisms and neurology… He has not addressed this very important aspect of perception with the same vigor that he applies to his objective equipment testing and analysis… There seems to be more subjective opinion being injected in regard to hearing sensitivity and contextual auditory perception.

We can take a photo from space, of the West Coast of the United States or any coastline, and roughly determine the actual length of the coastline, however we cannot determine the exact length of that coastline… because we do not have the tools to measure every inch of that coast… Even using fractal-geometry, we cannot measure these things… However, we can perceive the length of the coastline as not merely a straight-line from point A to point B… but as a convoluted path, far from being a straight-line…

There seems to be more subjective opinion being injected in regard to hearing sensitivity and contextual auditory perception.

And how would you quantify the parameters due to the large variability between your super hearing sensitivity and my injuries to my left ear. Pretty difficult to put the scientific data to the large variable in human perception. The scientific data can be drawn from the calibrated test equipment, no real possibility with the human factors involved? I think he draws out the available evidence that is solid hence the “science” label. The rest gets more into the opinion area, would you perhaps agree?

Come on now, “vagueness” really? Your going over the top with that comment, I think he manages pretty well to get the compass calibrated properly in the vast majority of cases.

Seems to me he’s quite transparent with his methods, pretty solid methodology imo. If it’s not up to your personal standards of testing that’s fair enough and your opinion. It’s a perfect opportunity for you to step up and opine some further thoughts and share them, I think that this is right up your alley and could be interesting to many people perhaps? You should definitely give it a go, have you ever done any of the YouTube videos and tutorials? I’ll definitely be ready to subscribe if you give it a whirl

@OffRode … It’s like having two painters interpreting the same subject… Let’s say: Henri Marie Raymond de Toulouse-Lautrec-Monfa versus Johannes Vermeer… They both depict the subject but which one is the most accurate or conveys the subject the best and to what degree will either product be appreciated by the individual viewing either painting…

There’s science and then the souls interpretation of the universe, perhaps the numbers on the spreadsheet are not the most important thing.

Ever hear about the kid that was born blind and can ride a bicycle around or walk around an unfamiliar place and walk through a maze of obstacles like he was sighted, by using ‘echo location’ like a bat, that he developed, using ‘clicking’ sounds from his mouth… he can determine the height of a curb or a tree and identify different trees in the path, etc…

At least UpTone put some effort into designing the EtherREGEN switch.

Well… how does that translate beyond the factual evidence produced by Amir? This is the area of study that needs more scrutinization than the simple tests he produces… certainly he challenges folks to do blind testing to either corroborate his evidence or to refute it…

At least UpTone put some effort into designing the EtherREGEN switch.

If you can’t dazzle with brilliance, baffle them with the bullshite huh! The balls on those folks is truly amazing to behold, they probably were used car salesman in a previous lifetime