Audirvana can properly display all of my iTunes playlists that were there before I installed Adv. However, I tried creating a new playlist, and the new one doesn’t display properly at all – songs are missing, even though, in the Playlist list view, the correct number of songs is displayed under the playlist title:

Looking at the playlist however: 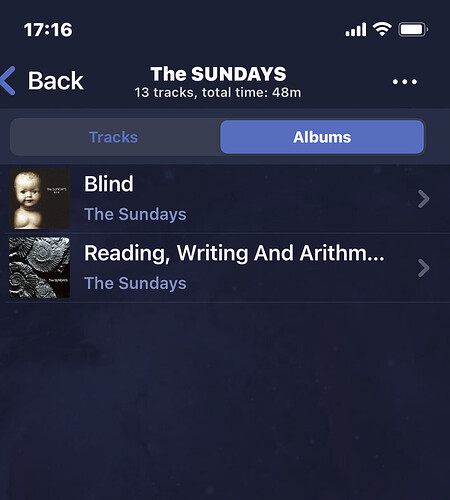 Tracks were imported from five separate albums, but only the tracks from two albums are shown (thirteen tracks shown from a total of 27).

Just to check that Adv doesn’t have something against The Sundays, I created another playlist and dragged a load of random songs into it. This time, it was worse: none of the tracks were displayed.

I tried deleting the playlist and then recreating it with Adv not running, thinking that it would force Adv to reload the playlist on startup, but, no… same thing. Also manually syncing from Adv’s settings doesn’t improve the situation. Incredibly, incredibly frustrating…

Can you send a mail at [email protected]? I would like to take a look at your AudirvanaPlusDatabaseV2.sqlite file

Hello, any progress on this…? Nothing that I’ve tried has worked…

Once the playlist was created in Music, did you click the Sync button in Audirvāna in the Library section of the settings and then restart the software?