Thanks, I’ll try and let you know !

Working for me too, i don’t have streaming playlists… 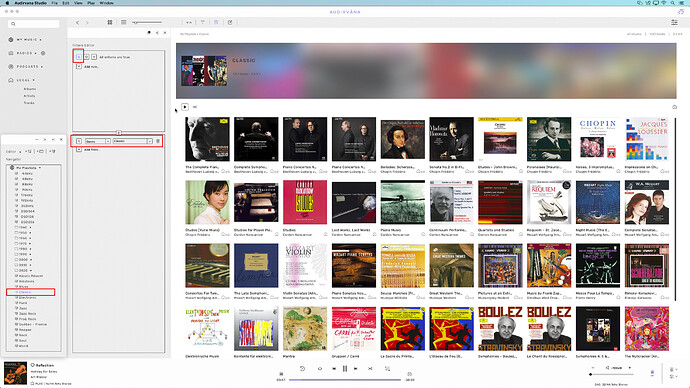 Ok, I tried.
The problem is that I need to exclude some genres and “doesn’t contain” is not available, only “is” and “is not” or “contains”

I’ve only got English I’m afraid.

The selection process seems overly comicated. I need to select and deselect several times to get what I want.

I’d love a simple side panel with drop-down menu so I can choose several choices like composer, soloist, nitrate etc … and be able to save these criteria for future use.

Apologies for English only.

I use Audirvana on a mac mini running Mojave.

I rely heavily on the Genre tag to create playlists with categories of music.

This works perfectly in 3.5. This smart playlist was imported into AS and works for all the albums already in that database. But every time I add a new album, it doesn’t show up in the smart playlist.

I can see the album in “Recently Added” but not in the playlist, despite being absolutely certain that the genre tag is correct in each file in the album. Also, the newly added album does show up in the equivalent playlist in 3.5.

I tried testing by using AS on a different mac mini, but not migrating from 3.5 - just installing AS as a new instance.

When I added albums, I found that the smart playlist didn’t show any matching albums. I could get matches by using other smart playlist criteria, but not genre!

This seems similar to your experience. I think it’s a bug with AS as 3.5 handles the same files and smart playlists perfectly.

I regret there is not the exact option you need.
I cannot help you further.
You may want to send a brief suggestion to the developper at [email protected]

Yep, thanks for the screen.
It appears that the rules don’t work as expected (as least as I expect them to work) but the filters do.
So, I deleted all rules and kept a single filter on the genre and it worked.

Unfortunately, tuning the playlist still looks tedious to me. For exemple it still fails to capture all my albums of the “classical” genre. I recently bought and imported an album with orchestral works of Floren Schmitt on Qobuz. For some reason the “genre” column is not set for this album but when I try to update the metadata, I am only allowed to update existing fields, no way to activate the “genre” column and fill it properly.
So, it looks like I’m going have to add manually many missing albums to my “smart” playlist, wich makes me wonder how smart it really is

All things considered, I am so far very confused about AS. The sound quality is good, really good but for the price of the subscription, I also expect a proper library manager. As far as I can see, be it bugs or ergonomy flaws, AS fails to be satisfying on this point and is very far from being user friendly…

Not really a solution, but for meta tagging I use a separate program outside Audirvana (I use MusicBrainz Picard, but there are many others). In that case you could edit the orchestral works of Floren Schmitt in the external program (and also add a ‘genre’ tag).

As said, not really a solution for Audirvana, but a workaround.

Thanks for your help, but I found an alternative using “all criteria are false”.
It’s totally counterintuitive and tedious to edit a playlist with 12 arguments.
I’ll wait until they fix this bug.

Interesting. I had never heard of this software before, I’ve just downloaded it and I’m giving it a try. Thanks for the tip

Another interesting fact : when I display my Qobuz imported record of Florent Schmitt in Picard, the “genre” info (and much more) appears in the metadata. And right now I’m playing the record in VLC Media Player. Guess what ? VLC herself reads the “genre” column.

Hence, the fact that the “genre” info (and much more…) is not available in AS definitely looks like a bug or a big flaw to me.

This continues to be an ongoing bug.
A problem for me as most of my playlists are organized by genre and grouping

Fixed in 1.5
Thank you Damien!

This topic was automatically closed 375 days after the last reply. New replies are no longer allowed.