ps: it would be great to be able to attach images to posts

Hello @BitPerfectAudio, I changed your profile to be able to send picture in a post

Can you send me a copy of the “Debug Info” while you are listening to this music? You can get it in Audirvana Settings>General>Debug Info

Note: By clicking on the Debug Info Audirvana button automatically copies all its content, all you have to do is paste it in response to this message

The only authorised file types are images (LOL), no text files, so I took snapshots of the debug info as well. Please let me know 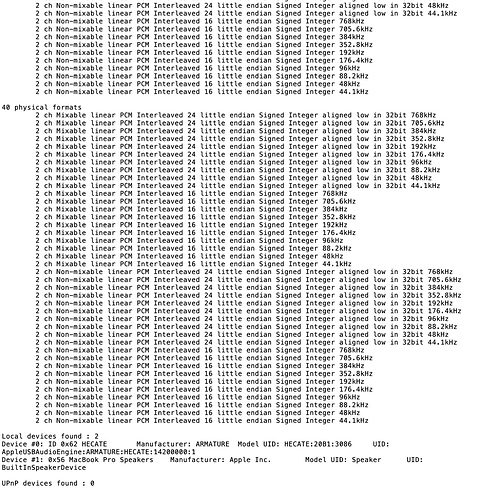 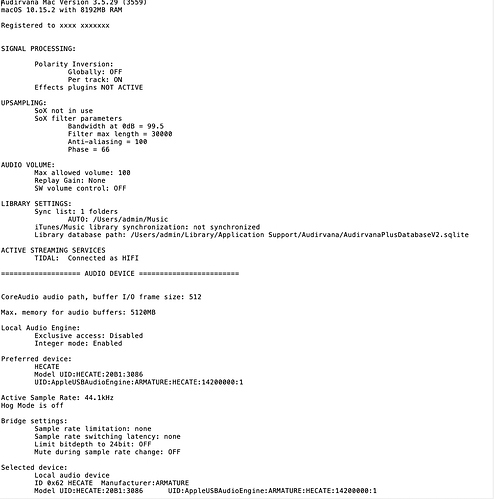 it will be text…

Damien, did you have a chance to look at my post yesterday with the info you requested? I have a feeling that the 96Khz playback limit is related to the “Tidal limit streaming quality to Master” on the Audirvana preferences, and/or the MQA decoder.
Is Audirvana going to release a fix asap, can you please confirm your findings?
Until a fix is released, it’s not really Nirvana…

RunHomeSlow, thank you for the tip. I can still read and understand enough to be able to do my engineering job even though I’m getting older by the hour

. An attached file would have been neater, plus I thought attached images were going to show a link rather than embed the content, like on other forum software, to keep the message body tidy

Hello @BitPerfectAudio, As per MQA decision, software players can only make the first unfolding of a MQA signal, so decode it only up to 96kHz.

But you can upsample this after to whatever you want, like 768kHz, or DSD, by enabling upsample at the bottom of the audio settings page.

Thanks Damien. I’ve not studied the MQA specifications yet, however I keep on being negatively surprised by it.
There is no point in upsampling, but thank you for the clarification

Which DAC are you using?

Your debug info shows (under MQA capability header) that you aren’t using an MQA enabled DAC or at least have it set that you don’t have an MQA capable DAC and looks like it is not set to autodetect if you do… best you are going to get in that case is one software unfold to 88.2 or 96kHz depending on the base rate; to unfold it to 176.4/192kHz or higher you need MQA hardware to do the second or subsequent unfolding. MQA hardware also has a specific filter for MQA encoded content. I have read that there could be a partial benefit to doing the single software unfold; though personally, I generally just use the HiFi/CD quality setting with non-MQA equipment and leave MQA to capable hardware since it is less fuss and uncertainty.

It’s kind of like watching a 4k HDR BluRay on a non HDR capable 4k TV, you won’t ever truly be able to judge it since it isn’t capable of displaying what the disc and player are able to output. Slightly different scenario, but similar enough to understand the situation.

Also, upsampling would destroy the MQA encoding as far as I know, as you said there is no use in doing so.

Can you explain to me how to use Audirvana as an MQA decoder? I am not streaming or playing MQA files since I cancelled my Tidal sub after the free trial and am only using Qobuz, but it would be good to know, since my Rega DAC doesn’t have MQA ability.

I see there is a setting where “DAC not detected as MQA, use as” with the options

I had it set to Not MQA. If I change it to MQA decoder then what will that do? And I haven’t a clue what MQA renderer is or does. Please point me to a page where this is explained, assuming there is one.

So what is the preferred setting when streaming MQA files to my DAC which doesn’t do MQA?

Not MQA. You get the first unfold that includes de-smearing of the recording equipment.

Hello BitPerfectAudio. I had the same „problem”. But thanks to the FB group

This group is for music lovers who appreciate MQA and are interested in the technology and discover together the importance of time-coherent sound reproduction. I have no commercial interest in MQA...

I think it was solved. IT DEPENDS ON THE DAC. Please read my post in this Group dated 6th of February 2020. Maybe it will help you to understand the output matter. The result I reached is attached picture.

To clarify a bit: MQA is an end to end system, taking care of the complete digital path from analog input to analog output. Thats why “Full MQA” must include output DAC as hardware. Software can’t control final timing errors happening in DAC if thats not part of chain. If people just listen and read some explanation of MQA before posting about disappointment, discussion would be more mature.