TIDAL playlists made my me not in sequence

@Damien3/@anyonelse: I just created a playlist entitled “Grateful Dead,Complete Live Chronology” from a post from the forum “music downloads and streaming” on Computer Audiophile/ Audiophile Style site entitled “TIDAL playlist share” post #12 of nov 14 2019 by Temporal_Dissident of ‘Grateful Dead, Complete Live Chronology’
from https://tidal.com/browse/playlist/90fd26c3-9d56-46af-b8f2-bfb40db7c225
I created a playlist of my own with same title on my TIDAL account it transferred in EXACT sequence to ROON BUT on A+3.5.29 the SEQUENCE is all out of order it starts out with ‘friend of the devil’ an MQA recording from American Beauty— this is supposed to be a CHRONOLOGICAL list of all GD live preformances–on TIDAL desktop and ROON it is in sequenquental order starting with ‘big railroad blues’ from1966 why can’t the A+3 list be IN ORDER?this happens frequently on A+3.5 and it doesn’t otherwise bother me but this is 2616 tracks in exact order the DEAD sang them—I would like them that way PLEASE HELP correct this thank you bobbmd

Hello @bobbmd, have you checked this settings in the Sort Criteria section in your Audirvana settings? 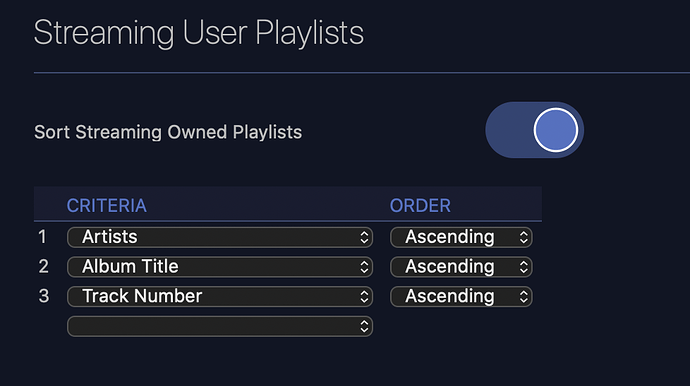 @Damien3 thank you never used that! Do I do it in ascending or descending order? I would like oldest first down to newest— there are 2616 tracks in that GD chronology playlist do I have to specify what playlist ? Thank you again for your rapid reply and suggestion bobbmd

@Damien3: also on my iPhone remote the playlist IS in descending order oldest to newest but still NOT on my desktop app for A+3.5–should I restart A+3.5 before that playlist will show up in the correct order?
bobbmd

First, the Sort Criteria settings are universal and will affect all your playlists.

Second, you can try sorting via Year, but I rarely find that streaming tracks have that field filled in. Alternatively, you can try sorting via Release Date. Unfortunately, that is only the date that the album was released and might not be accurate for your purposes. For example, a track for a song originally recorded in 1980 might have been digitally released in 2016, and it’s the latter date that will show as the release date.

Third, if none of the above work, I suggest you not select Sort Streaming Owned Playlists, and then manually sort the playlist to your liking. Yeah, 2,616 tracks. I get it; that stinks.

@Professor & @Damien3 thanks professor will not do THAT! it does stink! but just think of the time it took that poor guy to collect all that(in order no less)-- so since it already is in chronological order on my TIDAL desktop app account and it transferred that way to ROON I will just hit ‘shuffle’ on A+3 and enjoy the ‘better’ SQ on A+3 which is my preferred ‘player’.
BTW @Professor if you are interested i downloaded from archives.org ALL the GD original live debuts of all their own songs really cool historically ie ‘casey jones’ 6/22/1969 in Central Park and the first time they sang ‘ripple’ 8/18/1970 at Fillmore West so bare stark almost wouldn’t recognize it. Thanks for the help too much work for a guy with too little patience( too few patients also cfo says i have too time on my hands)
bobbmd