No question the release of Studio has been fraught with well documented issues. Hopefully they can be resolved but if not, if the software were to remain as it is right now in my room, I will purchase the subscription. Here, the sound, the volume control, and the GUI are all a significant improvement over 3.5. I want to describe these improvements but first I want to say that SQ is my paramount concern. I used XXHighend for years for that reason.

The Sound When Studio was first released I was surprised at the improvement in SQ. 3.5 clearly sounded a little fuzzy and less transparent than Studio. Also, I found Kernel Streaming sounded better than Wasapi, which sounded a bit noisy. (ASIO was somewhere between the two.) As others have reported, the sound of Studio changed a bit with the first updates and the sound change prompted me to change my settings. (That there was a change in sound does remain disconcerting.) Now, with the changed Studio sound, Wasapi makes the music come alive and Kernel Streaming sounds muffled. But even with these changes Studio/Wasapi sounds more transparent, tonally accurate, and musical than 3.5 in my room. My DAC is a fully updated Yggy. I don’t use any upsampling in the software because, to my ears, it constrains the sound. The Yggy of course does its thing. Haven’t heard my system sound this good in a long time. I am smiling and am hoping future updates only serve to leave the SQ unchanged or improved. Am having faith and feel confident that will be the case, though there be some bumps in the road.

The Volume Control I do not use a pre-amp so I rely on decent digital volume control. Lack of convenient volume control was one of the reasons I morphed out of XXHighEnd. Music data goes from my server (Paredo Audio) to an original Sonore Signature Series (2015), with I2S and SPDIF/BNC output; I use the SPDIF output to the Yggy. The Sonore has a built in precision volume control that Audirvana recognizes, so both 3.5 and Studio, provide the volume slider without activating software volume control. I learned with 3.5 that activating software based volume control and keyboard keys in Audirvana was neither necessary or desirable using the Sonore. Having those options activated degrades the sound a bit. With the Sonore/Audirvana connection I am able to change volume in .2 db increments with the slider which is just better than any software player I’ve tried. One can truly dial in the sound. But with 3.5 it could be a fight to get the slider, using a mouse, to go exactly where I wanted it. That fight has 85% disappeared in Studio and I am so glad. Although the “-+” buttons above the slider in Studio do not currently work, I will be in volume control nirvana when they do, especially if they are operable on the remote app too.
On the question of whether or how much digital volume control changes the bit stream, and hence the sound, I don’t know what to say. Every pre-amp I’ve tried here degrades the sound, though the digital volume is set to no attenuation/bit perfect.

The GUI The GUI with its many features strikes me as way cooler than 3.5. But the feature that I have most appreciated is the ease of determining the source of metadata problems and correcting them. I discovered this improvement when I was trying to figure out where Studio displays the Windows Explorer file path. Not intuitive, but once you’ve found it, it becomes a breeze to compare tracks and edit metadata. It’s also great that Studio provides a folder icon that takes you directly to the folder of the track in a Windows Explorer dialog box. It would be awesome if from that window’s dialog box one could select tracks to load into Studio. Maybe someday.

A lot of problems folks have described here have not been issues for me: only a couple of crashes early on and no studdering ever but I don’t do DSD. Though about half the time I have to use Task Manager to exit out of Studio and I’ve had some issues with 24/192 tracks playing consecutively: playback sometimes just stops at the end of each track. Hopefully these Issues will be addressed when other more pressing issues have been addressed for folks. In a way it seems like all digital playback is still a bit beta. Roon is great and better regarding convenience and information but just doesn’t sound as good as Studio. XXHighend is the best I’ve ever heard and my system now is finally close to that sound. But it is complicated and a bit clunky in its operation. I haven’t heard HQ Player but I trust the ears of those whom I know have compared it to XXHighend, and, like XXHighend, HQ Player sure seems way complicated for the average guy who just wants easily accessible fantastic sound. I’d hate to see Audirvana fail.

Hey Damien, send me the bill. Thanks.

Another way Studio is superior to 3.5: the mini-player. Not only do you get an excellent expert and standard mode that can be expanded to full screen, but also larger easier to change volume sliders for both software controlled volume or a upnp player volume control in expert mode. Really nice upgrade. And, perhaps I’m imagining this, but the sound seems just a bit cleaner in the mini player mode, which makes sense not having all the UI resources available or running.

Thanks for your input. Are you now using Studio/Wasapi and find it superior ? No upsampling?
Thanks

I’m not sure what you mean by “mini player mode”?
Is this on Windows or Mac?

Mini Player clicking on that small icon seen below:

… you get this mini player mode: 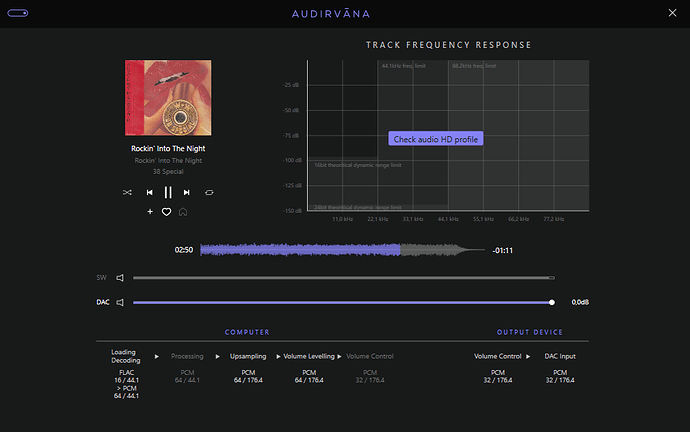 Thank you. I learn new things every day.

Yes, I am still using Wasapi/no upsampling to my Yggy, but if I had a pure NOS DAC I would definitely upsample. Since the release of 1.3 I haven’t had the time to do a careful A/B of Wasapi and Kernel Streaming but hope to this weekend.

I’m using cheap IFI Zen Dac and Edifier S1000 MK II and cant really tell the difference between Kernal ,ASIO and WASAPI.
I do hear tighter bass if I upsample to the highest setting on my DAC using Sox.
Could be placebo…
DSD upsample doesn’t sound as good. Seems to thin things out and lowers volume.
Fun to experiment though.