Is it possible to add a setting that will allow native DSD (bitstreaming) over the UPnP output?

I recently downloaded the Audirvana sponsored NativeDSD download of the Raizes album (thank you very much). Unfortunately even over UPnP output, DoP is mandated by Audirvana unless I’m missing something. This means the DAC must support a PCM sample rate of 705.6kHz, but none of my DACs do.

Other server programs on Mac including JRiver do allow native DSD bitstreaming over UPnP, it would be nice if Audirvana had such a setting as that would unlock DSD256 to those DACs that only support a 384kHz maximum PCM sample rate.

As a side note, I’ve seen other references on this forum to Audirvana transcoding to 352.8kHz PCM in this scenario, and with two of my DACs that is exactly what happens. At a minimum, it would be nice if Audirvana did not transcode and just downsampled to the DAC supported DoP128 in this scenario.

DoP is just a PCM encapsulated DSD (with a 8 bit header), nothing of original resolution is lost.
Maybe there is something with your dac, which one do you have?
Unless the Dac has some specific drivers (developed by the dac manufacturer), DoP is the only way to play DSD on macOS.
Exasound seems to be the only one manufacturer that provides specific macOS drivers for its dacs

Your statement is true for dsd via USB on Mac.
But native dsd should be available over DLNA afaik on certain DLNA renderers. I believe that is what the OP was talking about.
I’m in the same boat with Marantz PM7000N.

What you want depends on the used dac. I have downloaded the same Raizes file 250 DSD.
My dac is the RME ADI 2 FS dac. It allows in the Set Up Direct DSD. I did that and the output via Audirvana is DSD 250. Sounds perfect!

That’s right, I am speaking only of Audirvana acting as DLNA/UPnP server, sending the DSD256 to various endpoints. I don’t see any reason why that has to be saddled with DoP.

If I launch a JRiver server on my Mac, no such DoP requirement exists, it can be set for DoP, or native DSD (bitstreaming) to the endpoint, which allows DACs that don’t support very high PCM sample rates to still play DSD256 natively.

The 2nd aspect is why does Audirvana transcode to 352.8 kHz PCM when the DAC can handle DoP128? That is exactly what happens on 2 of my DACs, each can play DSD256 natively, but they can’t do the required 705.6 kHz PCM rate necessary for DoP256. In that scenario, I’d think Audirvana would just downsample to DoP128, but it doesn’t, it is transcoding to 352.8 kHz PCM for some reason.

That is exactly what happens on 2 of my DACs

Tell us which dacs they are … we could better understand …

JRiver server on my Mac, no such DoP requirement exists

That’s right, I am speaking only of Audirvana acting as DLNA/UPnP server

I think there is a bit of confusion here. Audirvana is not a DLNA/UPnP server like JRiver is. It can just stream using UPnP to te compatible media renderers. That’s a different operational mode.

The PCM rate your DAC supports is not directly related to the DSD rate using DoP it can support or supports. It’s implementation question. It’s true that the DoP consumes double the bandwidth when compared to the Native DSD, but the bandwidth here is not the problem.

DSD256 is crazy high resolution, it takes a serious high-end DAC and accompanying equipment to really benefit from this. If you think you’ll be able to fully appreciate DSD256 using the low to midrange DAC (even less using multimedia receiver), you’re fooling yourself.

Please, I am not at all interested in a back and forth regarding whether or not one can hear any difference, and I am not claiming in any way that DoP doesn’t sound good, completely not the issue. I am merely stating that the DSD256 album I have can’t be played on several of my DACs through Audirvana as anything but 352.8 kHz PCM.

I have several different DACs, and they can and do play DSD256 as a native bitstream, evidenced by both the DAC’s sample rate display, and also the Renderer software’s (Moode) Audio Info pane.

This is true of JRiver servers running on either Linux, or macOS, both show 11.2MHz sample rate and bitstreaming (no DoP). While I appreciate the link provided above to the JRiver forum, I believe it is old information, or simply incorrect as of right now. I absolutely see JRiver on both Linux or macOS servers outputting native DSD256 (bitstreaming) as reported by Moode’s Audio Info pane.

However, when trying to use Audirvana as a server in the same way, the stream is being transcoded to 352.8kHz PCM for some reason. The two DACs that display that are a Topping D10, and a Khadas Tone Board. Each of them only supports PCM up to 384 kHz, so they can’t do DoP256, only DoP128, however that is not whats being sent according to the Audio info pane in Moode, it’s 352.8kHz PCM, and the DAC display on the D10 confirms that, however with the Khadas DAC there is no display so this can only be observed in the Moode software’s Audio Info pane.

The other DAC that also tops out at 384 kHz PCM is a SIMAUDIO Moon 280D, but that renderer is not a Moode-based RPi, it is a Sonore microRendu.

So if JRiver is truly DoP only (I don’t think it is), then the Moode software is misreporting that it is native/bitstreaming when it is not. For comparison, when I play a DSD128 album with Audirvana over UPnP and look at that Moode Audio Info pane, it clearly states DoP encapsulation as 176.4kHz PCM frames and DoP128. The same is not true of DSD256 however, there is says simply 352.8 kHz PCM is what Moode receives, and the DAC display agrees.

I know, a bunch of moving parts here, but the basic question is why does DSD output over UPnP with Audirvana need to be saddled with DoP?

The PCM rate your DAC supports is not directly related to the DSD rate using DoP it can support or supports. It’s implementation question.

I do not understand this at all.

Audirvana is not a DLNA/UPnP server like JRiver is.

Perhaps this is then the answer regarding forced use of DoP, however it doesn’t explain why the DACs are seeing 352.8 kHz PCM.

Which DSD rate is supported over DoP is not directly related to the max sample rate supported by a given DAC.

All manufacturers should support the max DSD sample rate they advertise, both over DoP and Native DSD. At least up to DSD256. We know that’s often not the case unfortunately.

Moode software is misreporting that it is native/bitstreaming when it is not.

Moode just tells you the sample rate, it doesn’t tell you if it’s DoP or Native (bitstream) DSD.

Totally agree, moOde is quite imprecise.
Here you can see what GentooPlayer displays while playing a dsd128 file to a Khadas tone board.
The missing information in moOde is the RW_interlived format 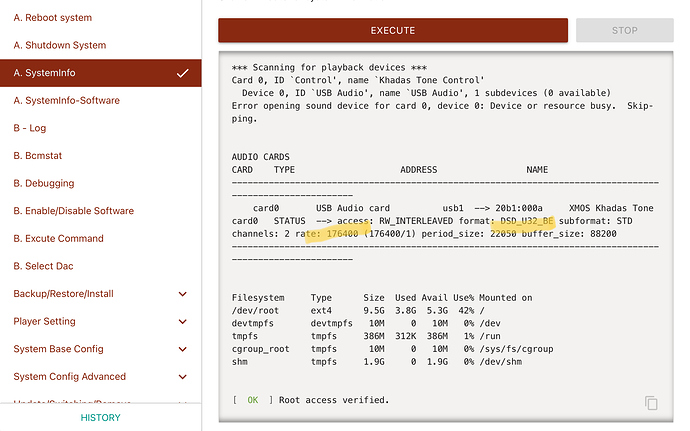 And you can read here about DoP
https://dsd-guide.com/dop-open-standard#.X5hKfC_YOhA

My instance of Moode does show in the Audio Info pane whether or not it is DoP or bitstreaming, I wish I could post a screen shot but I’m not at home right now, and I’m not even sure how to do that on this forum, or if my post count is too low for that.

Having said that, it is entirely possible that Moode is displaying incorrect information, and I do recall some mention on the Moode forum of that being one of the enhancements forthcoming in the Moode 7 series.

In carefully reading the JRiver forum post as you requested, I see nothing at all there about DLNA/UPnP, which is the specific question I am asking. That post is discussing direct USB connection to a Mac computer, not streaming from a server to an endpoint like I am.

I see now in digging a little further that Topping does list DSD128 as the limit for the D10 when using DoP.

But the question remains why would Audirvana then transcode DSD256 to 352.8kHz PCM? Shouldn’t it just downsample to DSD128?

Here are the screenshots I mentioned earlier, the first is Audirvana streaming to a Moode UPnP endpoint at DoP128: 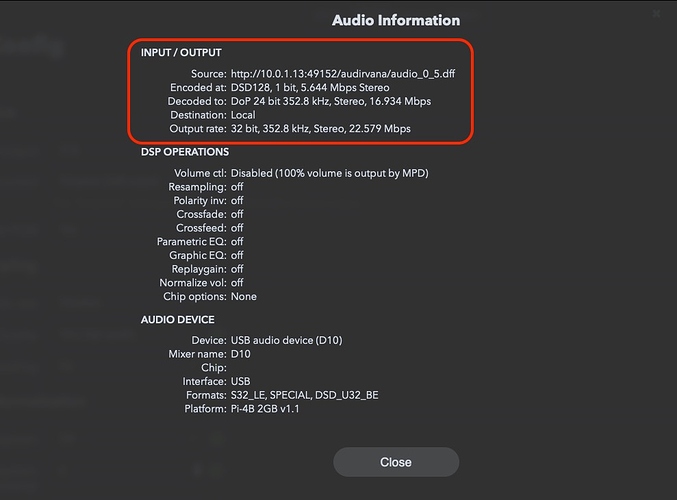 Next is from a JRiver server running on macOS 10.15.7, again DSD128 but this time not DoP, native bitstreaming: 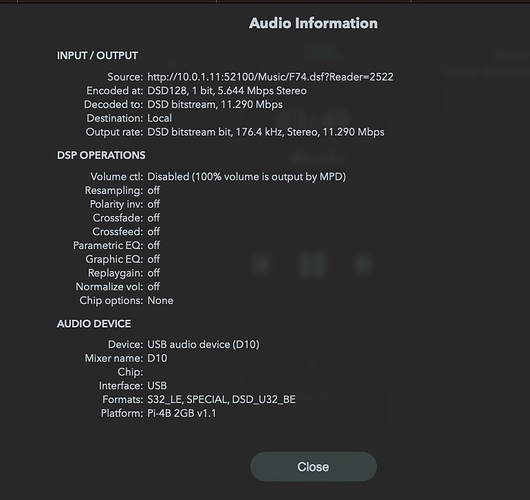 See the difference I mentioned? Moode does display whether or not it is DoP, in this case it is not DoP, but that JRiver server is running on a Mac, suggesting the forced use of DoP does not need to apply to UPnP streaming with Audirvana. I appreciate Audirvana’s UPnP implementation may be different, but that’s the feature I’m asking about, can Audirvana allow UPnP streaming of DSD without forced use of DoP?

Lastly, here is a shot of the forced transcode to 352.8kHz PCM: 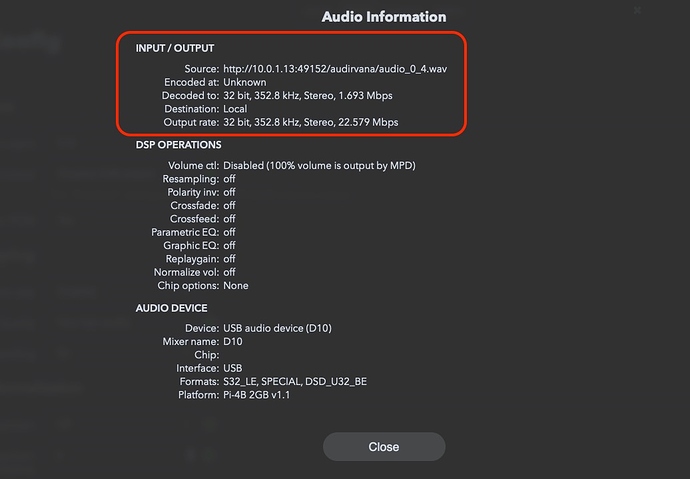 See how the input is a .wav file? That is the DSD256 Raizes album, but it is being transcoded instead of downsampled to DSD128.

Footnote: Moode does display the RW_INTERLEAVED format under Audio Device as DSD_U32_BE.

Thanks for this well articulated example.

That’s what I was trying to explain to @Damien3 as well. His point of view seems to be that since Audirvana doesn’t detect a DLNA renderer as supporting native DSD then it’s the renderer’s implementation issue.