Noise end of track before next track starts

there is static noise ( or 0.5 sec sound clip of some song ) when a track is done and jump to another track… any idea… ? im running on kernal streaming mode for my m2tech hiface evo… no such issue on 3.5…

Hello, what are the audio settings you have? Can you do a screenshot of it ?

I have the same static/hiss at the end of songs sometimes, not all songs. Its very short 0.5s or less. I have it on Kernel streaming mode. Windows 10 into a Chord Qutest. Otherwise sounding great : ) 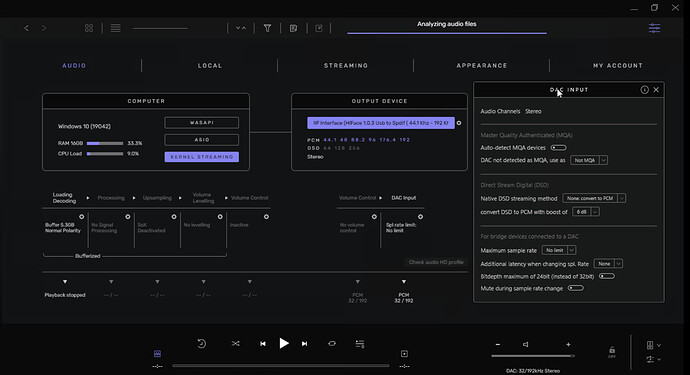 If you try without KS, do you have the same issue?

I also have the same issue. There is a loud noise sometimes at the last 1 second of the track before switching to the next track. The noise is louder than the volume of the music (depending on the volume can be very loud). I’m using Kernal Streaming on Windows 10. 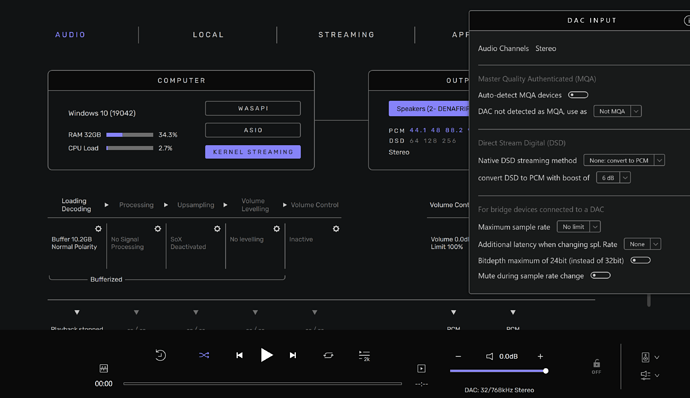 I tested ASIO. The loud noise at the end of audio tracks only happens with Kernel streaming. It does not happen with ASIO.

Same issue for me too. Hope this gets fixed on the next update!

I confirm the same for me at KERNEL. Please correct it, it is annoying when listening loudly.

Likewise, only occurs in KS mode - WASAPI and ASIO on WIN10 are fine. For me it’s a loud click on move to each next track. Note this is only when playing local library tracks. Qobuz is fine.

Also, does anyone know why for any source, the player chooses to have some tracks with a horizontal line above and below the listing? 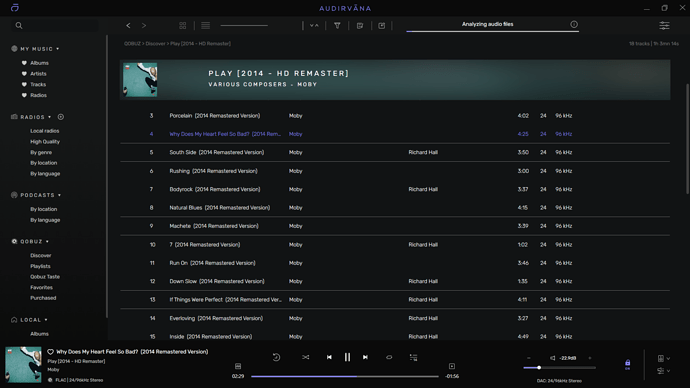 Does anyone know if this has been resolved? My studio has just started doing this today.

Still have it using Kernel. Have posted it as well.

Thank you for the reply. Mine is on library and streaming. What DAC are you feeding and is it via USB or dlna? Mine is on an OPPO 205 (ESS dac) and via USB. Using dlna with the OPPO results in clipping about 1 second off the end of each track and has always done that. The noise via USB is new.

Long time issue, still there. On the same settings, there are conditions where it doesn’t happen. However, I coudn’t identify anything reproducable yet.

I have the same issue streaming Qobuz using Kernel mode. It’s like a short burst of white noise between tracks, but only occasionally, and the playing the same track into the next doesn’t do it. It seems almost random.

Not a huge issue for me as ASIO pretty much sounds as good as Kernel in my setup. Still, it would be nice to have that mode as an option without the issue.

I have the same issue when using kernel streaming with Qobuz in the free trial of Audirvana Studio. Pity, as I feel otherwise very much at home with the sound in this configuration. Might become a deal breaker. Is someone at Audirvana working on this?

I wish I knew if it is being worked on. For me kernel is appreciably better sound than ASIO but the problem only occurs with kernel. I also note that it usually does not happen on the first two or three tracks but after that it is consistent. I also note that at the time it happens the blue banner on the top of the screen saying checking the definition of the source flashes on and off again. Not sure if that happens with asio or wasapi.